The Bright Civilized face of Kuwait’s History and Future

The Abdulla Al Salem Cultural Center which is built on the site of an old high school having the same name is today a modern museum consisting of six parts representing the modern aspect of civilization. This structure is considered a great achievement not only for Kuwait but for the religion and the world. Its architectural designs and facilities emulate the finest international centers. It reflects the cultural, artistic and scientific history of Kuwait, in addition to the Islamic culture, tradition, and civilization.

Abdullah Al Salem Cultural Center is located on an area of 130 thousand square meters with a cost of construction of 117 million dinars. The cultural center opened for public in February 2018; thus choosing it to be our destination this issue. The center is managed by Al- Ghanim International and its building are composed of a basement, Ground Floor, and Two Main floors. The center also has two parking buildings at both east and west of the structure that can host up to 1200 cars.

Today we take in a tour inside Abdulla Al Salem Cultural Center; which is considered one of the largest architectural centers on both local and international standards. Due to its cultural importance, His Highness the Amir Sheikh Sabah Al Ahmad Al Jaber Al Sabah supervised the construction. This structure aims to shed the light on Kuwait’s culture to restore its cultural leadership in the region. 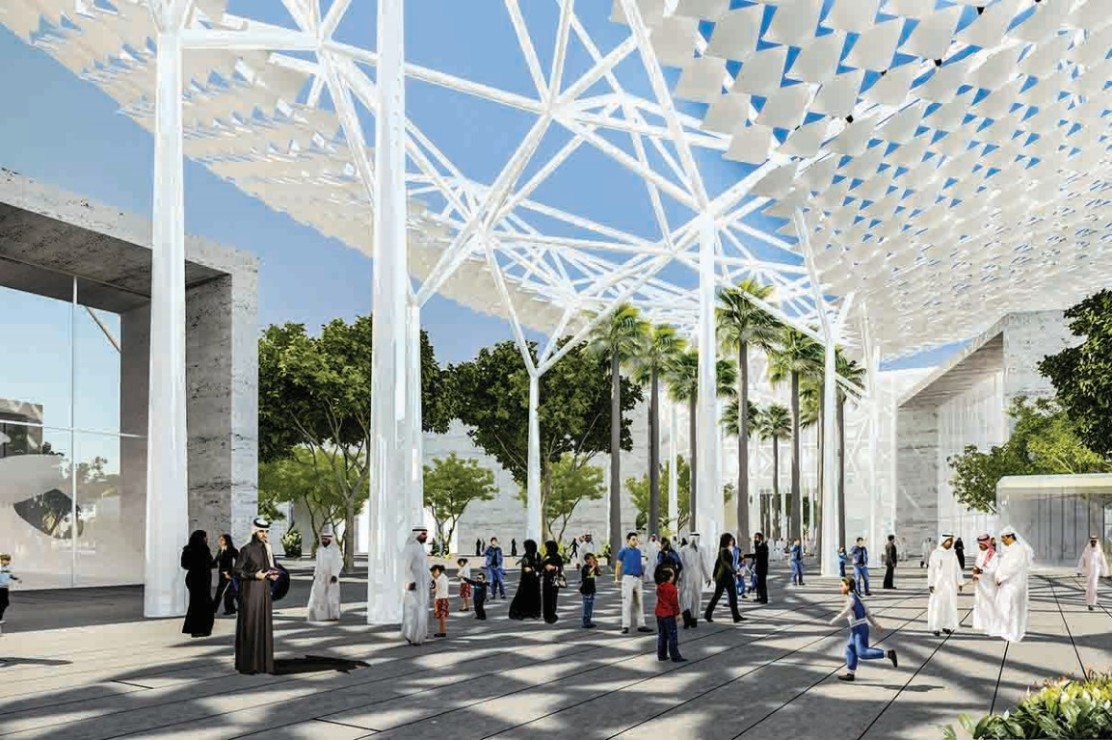 The Cultural Center is an Amiri vision to have Kuwait further exposed to Global cultures and technological developments. A vision aimed to create cultural, entertainment and educational dialogue; to develop cultural concepts and enrich the education. Taken from the speech of the Head of Financial and Administrative Affairs in the Amiri Diwan; the Head of Executive Committee for the Cultural Center, Mr. Abdel Aziz Isaac.

Architectural center in the middle of the country

The Center is located in a strategic location; relatively close to everything, in the center of Shaab overlooking the Gulf road. Shaab area is considered one of the largest provinces in Kuwait in terms of population. This is area is distinguished by having Commercial Complexes and Residential Buildings along the Gulf Road. The museum is built on the old site of the Abdulla Al Salem School for Boys; which was an important educational monument and one of the first schools open that had the Government vision for education and National culture.  The site of the old school is now the site for one of the most prestigious educational, cultural, and entertainment monument

The Sheikh Abdullah Al Salem Cultural Center was designed to rejoice the outstanding scientific and cultural achievements, as well as to highlight Kuwait’s history and the Islamic and Arab world culture. The exterior design of the buildings is inspired by the world’s cultural sites; where the outdoors has many artwork and sculptures that align with the building’s content to reflect the beauty of the design.

The combination between the architecture design and its cultural role; makes it a significant monument which reflects the civilized aspect of the country and in line with the Amir’s vision and guidance to highlight Kuwait’s civilization and regain cultural leadership in the region.

The structure consists of 8 building which includes six museums. The museums are the Natural History Museum, the Science Museum which includes galleries explaining human anatomy, the Technology Museum, the Arabic and Islamic Science Museum, the Space Museum, and the Fine Arts Center. The Museums consists of 22 galleries with more than 1100 piece of exhibits. The Center also has a theater that fits up to 300 people, Public Service building, Information Center, common area exhibits, and 25 water and jet fountains.

Museums for all Scopes

For science lovers, the Museum of Physics and Chemistry is a good pick. This museum displays all transportation means and its development throughout history. In addition to the Interactive galleries that display the innovation and scientific research in regards to f Physics and Chemistry. The Science Museum also has three labs

This two-story museum allows you to get a closer look at the history of aviation and view the robotics and artificial intelligence exhibition, as well as physical and chemical experiments; while the second floor is devoted to innovation.

However, in the Museum of Natural History, you can see the wildlife, biodiversity, life before Arabian wilderness, prehistoric life, Earth, and environment.

In case you wanted to learn about the history of Arab Science; the museum of Arabic and Islamic museum is your destination. The museum is full of exhibits, interactive touch screens, movies, and has samples from historical Mosques as well as exhibits from the Golden age of Science in the Arab civilization.

The outer space is no longer just pictured in the movies; today you can learn about what happens in the outer space through the museum. The center includes exhibits for various Space crafts, a Dome as well as external exhibits of dinosaur structures and excavations that reveal prehistoric life traces, Bird flock sculptures and animated figures of solar radiation

As for the wildlife, marine and tropical forests lovers, there is a section for you. All you have to do is start from the second floor which will take you in a glimpse from Kuwait to a complete tropical forest with shows that illustrates its nature and along with the animals and insects living there. This building also hosts an enormous aquarium where a wide range of marine life.

As the visitors’ interests vary, the center is keen to satisfy all tastes. The center is a complete service complete with a special service such as prayer rooms, children entertainment, and restaurants.

The design of Abdulla Al Salem cultural center won in September 2017 the Life design award for its unique design in the public enterprise section; one of the most prestigious awards in the world of architecture. This award has been given as appreciation for special projects for the past 16 years and it is considered a benchmark for future design.

The cultural center opens from Monday through Wednesday and Saturday from 9a.m. till 7 p.m. and till 9:00 p.m. in the outer arena and on Thursday and Friday from 3p.m. till 10p.m. and the outer arena till 11 p.m. and closes on Sunday.

There was an error retrieving images from Instagram. An attempt will be remade in a few minutes.