Mohammad Al Nashmi is a young man who loves writing – perhaps because it is his way of expressing all that rages inside and as a means of change. He has penned several successful novels and famous television series; the latest of which “Laka youm” was aired last Ramadan. Mohammed has a dynamic personality, and we try to know more about him through this interview.

Who is Mohammad Al Nashmi?

A social and sensitive young man; sometimes lazy and often positive. I love life and people. I’m shy and usually find it difficult to talk about myself so I leave the opportunity for people to discover me with time.

What is your biggest passion in life?

I aspire to change some of the concepts that do not convince me through my novels or series. My passion is writing.

How did you take up writing?

My mother discovered my talent in my childhood and she tried to develop it. She took me to meet many writers like Mai Charrad and Mays al-Othman to help me start the journey. Then I completed my way on my own.

Which book has touched your soul?

I read less, since my time is divided throughout the year between writing a series or a novel, but I love to read on flights. I love detective stories although I’m a passionate and social writer. I adore the writings of Agatha Christie and Stephen King.

Tell us about the turning point in your life.

The turning point was in 2009 when I decided to write a novel. I decided to write the first part of “Banat Al Thanawiya” or “High School Girls” in colloquial Arabic. I was surprised by how fast the copies sold; after which I was criticized by some readers and most of the older writers. My first edition opened the door for a new generation of young people who have been affected by my experiences and also began writing in colloquial Arabic as I did. I completed writing the three part series until it was transformed into a television serial. In fact I do not understand the reason for attacking colloquial Arabic. I have not heard a single critic criticizing the vernacular that Naguib Mahfouz employed in most of his novels. I wish they would criticize the content and not the style of writing, because what’s important is the message and not the dialect in which the message is sent.

What do you consider your greatest achievement?

My first experiences in a television series “Azef Al domoaa” that was produced and aired in 2006. Back then I was only sixteen.

What’s the most beautiful work you’ve done during the past two weeks?

My mother had surgery and she stayed in the hospital for nearly five days. I did not leave her side throughout, and despite the tiredness I felt very happy to stay with her. I do not think there is anything more beautiful than being there for your family when they need you.

Does writing a television script differ from writing a novel?

Television has its own provisions and it requires more details in narration, while in a novel I can move from one event to another in a literal manner which convinces the reader.

Is literature a friend or an enemy, and why?

Tell us about the nature of your books. What distinguishes you from other writers?

Does a writer have to be knowledgeable?

Certainly he must be knowledgeable and understand the psychological dimensions of all types of personalities in the community, as he needs to move from one character to another while taking into consideration the difference in cultural backgrounds between characters.

What usually drives one to write?

Pain of course. Writing is cathartic; in which the writer heals himself and cleanses his wounds.

Is there a dream you haven’t accomplished yet?

Is there a dream that needs time to be achieved?

Perhaps contributing to the revitalization of the cinematic movement in Kuwait.

What is your philosophy in life?

I can achieve everything …if I really want to achieve it.

Who is a woman to you?

She is the one that adds color and beauty to everything she touches. 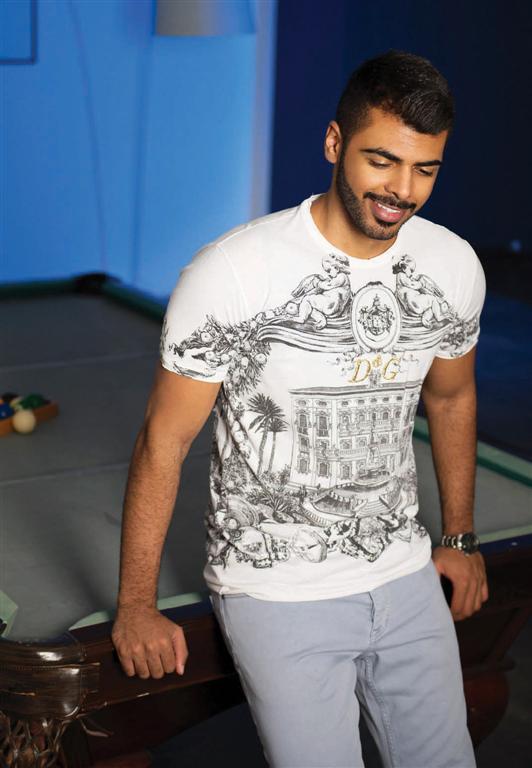 Do you understand fashion?

I’m not a specialist, but I love to follow up with high fashion even if I usually do not wear it.

How would you describe your style?

I’m classic and don’t like bold colors. I believe that simplicity is the most beautiful.

Which is your dream car?

My dream car was Porsche Panamera but I bought it last October. Now my new dream car is a Rolls Royce.

Which watch are you a proud owner of?

Which city inspires you to write?

I love Beirut but usually I don’t write on vacation.

Is there a place you love?

Rome… I have great memories there.

Define the following words in one sentence:

Love: One of the most important causes of happiness.

Friendship: The most sincere mirror of the human in which he sees his disadvantages.

Work: It makes me feel that there is a reason for my existence in this life.

Patience: It is my most important positive feature.

Child: One who does not need to learn how to be honest.

Dream: All the massive accomplishments we see around us began with a dream, because the owner decided to turn a dream into reality.

Beginning: Is darkness and risk-taking.